All Collections
Copyrights
3/4 What is "Fair Use"?

In this article we cover the legal concept of "Fair Use" and provide a few practical examples.

Written by louis
Updated over a week ago

Welcome back to the SuperRare Copyright series. This time around we cover "Fair Use" and provide examples of how it has been applied in recent art history.

The “fair use” defense is typically asserted as a defense to a copyright infringement claim and it works exactly like it sounds – the “use” of another’s copyrighted content ought to be “fair” if it is going to be tolerated. Artists appropriating unoriginal works should have a strong artistic basis, rationale, or purpose for exploiting the former work, and should not be motivated solely by passing off the work as their own or undercutting the original artist’s ability to market his or her own work. “Fair use” can be thought of as an embodiment of freedom of speech in the art domain. Even though the rights of copyright holders should be respected, some copying and appropriating should be tolerated to facilitate a free and open exchange of ideas, concepts, and artistic statements. Although the standard for “fair use” varies around the world, Artist should consider the tests and examples below before minting works containing unoriginal appropriated content. When considering whether a “fair use” applies to your use of another’s content, United States courts will often strongly consider:

Whether the Work Has a “Transformative” Purpose, Such as to Comment Upon, Criticize, or Parody a Copyrighted Work

Sometimes considered the most important factor, consider whether your work creates something new by transforming the meaning, expression, or purpose of the appropriated content or whether your work is merely copying the visual elements of another work. Ask yourself, did you add any additional aesthetics, elements, information, or creative input or are you relying primarily on the aesthetics or message of the appropriated content?

Consider the collage piece “Niagara” by Jeff Koons (shown below right), which appropriates a photograph of a woman’s legs taken by fashion photographer Andrea Blanch featured in Allure magazine. Koons directly copied, cropped, and re-oriented the photo before including it in a painted collage among other pairs of women’s legs and other artistic elements. Koons allegedly created the piece to comment on society’s ongoing interest in mass imagery, consumerism, and desire, and specifically chose Blanch’s photograph because its origins (Allure Magazine) fulfilled the purpose of his critique on modern human appetites and advertising. In Blanch v. Koons, 467 F.3d 244 (2d Cir. 2006), the court found that Koons’ use of Blanch’s photograph was “fair use” because it was used to create a new work of art with a distinct meaning, message, purpose and character – rather than a rote reproduction. 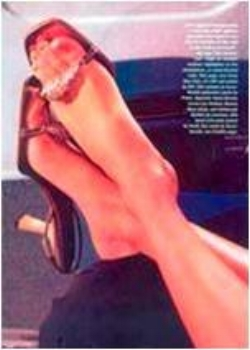 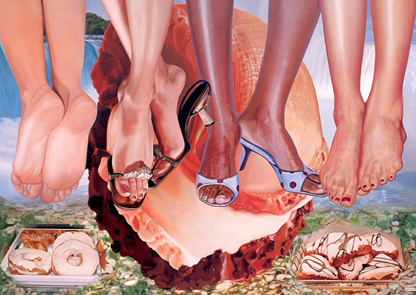 Now compare to the Jeff Koons sculpture (shown below right) that was found to infringe the original Art Rogers photo (shown below left). Even though Koons argued that the sculpture was satire that criticized societies’ fascination with mass-produced commodities, the court ruled in Rogers v. Koons, 960 F.2d 301 (2d Cir. 1992) that the work was not fair use, highlighting the amount of the work that Koons borrowed and questioning how Koons’ use of this particular work aided his claim of satire. It probably did not help Koons that his sculptures sold for $376,000, with no royalties going to the copyright owner of the photograph.

The Nature of the Original Work

Certain types of works are more deserving of protection than others. In the world of fine art, its fair to say that most original creations are deserving of robust copyright protection, but only to the extent that they include protectible subject matter. Take for example, the sculpture (below right) that was found not to infringe on a photograph (below left) of a mountain lion holding a baby cub in her mouth. According to the court in Dyer v. Napier, (D. Ariz. Mar. 2006), the elements borrowed are found in nature rather than elements resulting from the photographer’s creative expression. Generally speaking, the less protectible the original subject matter, the less likely it is that the borrowing artist will be found to infringe. 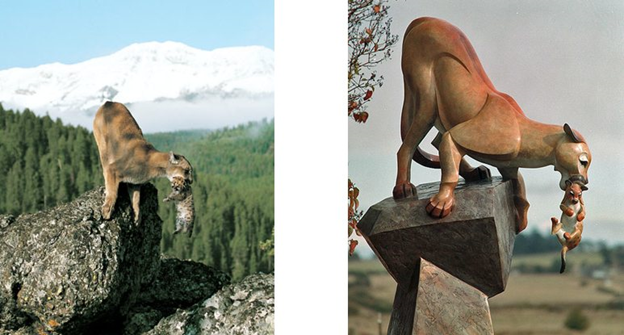 Sculpture (shown right) found not to infringe on the photograph (shown left) because elements occurring in nature are less protectible than creative artistic elements.

The Amount and Substantiality of the Portion Taken

Simply put, the more you copy the more your copying will not be considered fair use. However, courts do not just look to the physical or literal amount copied but may also look to whether you copied the “heart” or the most memorable aspects of the work. For example, certain types of transformative uses like parody may require extensive borrowing to ensure that the audience knows at whom the parody is aimed. Take for example the poster (shown below right) for Naked Gun, which literally copied nearly every aspect of the Demi Moore magazine cover, save only the photoshopped face of the ever-demure Leslie Nielsen. In Leibovitz v. Paramount, 137 F.3d 109 (2nd Cir. 1998), the court found that the defendant’s extensive copying fulfilled the purpose of parodying the original photograph and qualified as “fair use.” 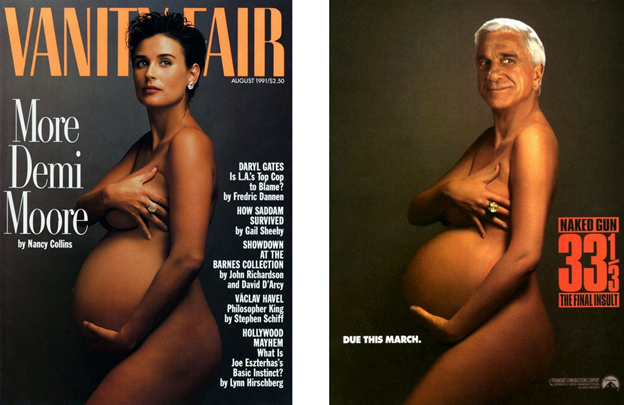 Despite almost being a literal copy of the naked Demi Moore, the court found that the extensive copying in the Naked Gun movie poster was a proper parody and qualified as “fair use"

Like copyright law, the “fair use” doctrine also can apply to the use of trademarks (i.e., a company name, logo, or slogan). In general, trademark owners enjoy the exclusive right to use their trademarks in commerce. However, just as some Artists build upon existing copyrighted artworks, some Artists use well-known trademarks in their works often for satire or critical purposes.

Generally speaking, Artists may use trademarks freely for the purposes of commentary, criticism, and parody as long as it is clear what the purpose of the work is. However, if you are using another’s trademark for the any of these purposes, it should be aimed at the owner of the trademarks. For example, if you are going to use the style of the Coca Cola logo as a parody, the parody should be aimed at Coca Cola instead of just using the famous Coca Cola logo to attract more attention. Consider the street-art piece below by Fukt, which uses the McDonald’s logo to fulfill a critique on America’s militaristic, commercial, and cultural dominance. The piece clearly is using McDonald’s trademark, but it is also clear that the use of McDonald’s trademark is for commentary purposes, and not any purpose officially authorized by McDonald’s or related to McDonald’s actual restaurant services. 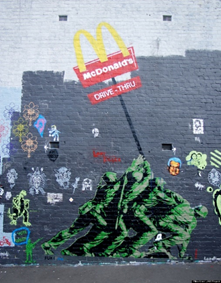 Example of "Fair Use" of the protected McDonalds trademark

Artists are solely (or with the help of their attorney) responsible for ensuring that the content they mint does not infringe the rights of others. Indeed, our Terms of Service and minting procedure require the Artist to represent that their works are in fact original creations. Whether or not an Artist believes that his or her work qualifies as “fair use,” they may still be held liable for infringement if an aggrieved copyright or trademark owner decides to institute a legal action.

SuperRare Does Not Make “Fair Use” Judgements for Artists

We want and expect all of our Artist’s to post non-infringing and original content, but we recognize that Artists need to borrow and build upon other works from time to time to fulfill their artistic message and style. However, SuperRare will not make value judgments about the merit of particular pieces or the credibility of a “fair use” argument if a work is allegedly infringing, as it is almost certainly impossible for SuperRare to do. Consider the work from Richard Prince’s series “Canal Zone,” (shown below right) which incorporated a photograph of a Jamaican local by Patrick Cariou (shown below left). Do you think that added elements of a choppily photoshopped electric guitar and a few purple ellipses sufficiently transform the work? This work was actually held to be infringing by one judge only to be overturned by another judge on appeal, illustrating that even judges and attorneys have differing opinions on what constitutes “fair use.” 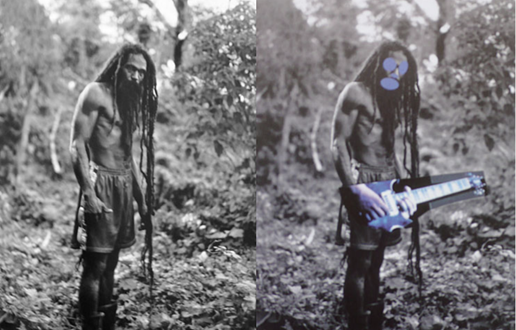 These examples of "fair use" are for illustrative purposes only. SuperRare cannot and will not decide whether any Artist's creation qualifies for a "fair use" exception. SuperRare is not capable of providing legal advice and does not operate with the authority of a court of law. SuperRare is primarily concerned with fostering the well-established community of Artists and Collectors, combatting copyright infringement, and fulfilling its duties under the Digital Millennium Copyright Act (DMCA), as discussed further below. If your minting conduct is in violation of the Terms of Service, these Copyright Guidelines, our Community Guidelines, or is receiving complaints of infringement, SuperRare will take any action available to it at its sole discretion whether or not a "fair use" exception may apply.

Thank you for reading! Next and last of this copyright series is a reminder of the norms and expectations when it comes to Copyright Law and Copyright infringement.

Did this answer your question?